Author Kristen Day has stopped by today with a guest post for the Awaken (Daughters of the Sea #2) blog tour!

What inspired you to write The Daughters of the Sea series?

Paranormal is my normal: I may or may not be completely in love with YA Paranormal Romance Series. Actually, it’s more of an obsession. I devour them like strawberry shortcake cheesecake (best dessert EVER) and have no control over the need to read them over and over. I’ve read The Hush, Hush series four times so far, but who’s counting? I fell in love with writing since succeeded in writing that pesky letter G in cursive (or Z for that matter). Then I fell in love with it all over again when I learned how to diagram sentences. It became more of a work of art to me. It just…made sense. So anyway, after reading every YA paranormal romance novel on the planet, I found myself craving certain aspects to the story that I wasn’t getting in the books I was reading. I wanted a stronger heroine, less drama with more action, and a different kind of ‘darkness’. That’s when I decided to create my own imaginary world and characters; intertwining all of the things I couldn’t seem to find in other books. Life’s a Beach: Choosing the beach as my location for the series was a balancing act. I despise mermaids, but love the idea of having a connection with the sea. This is where my favorite classics came into play: The Odyssey and The Iliad. I know what you’re saying - seriously? That awful monstrosity of a story we were forced to read in high school? Yes, that’s the one. I didn’t have the normal gag reflex most of my friends had to reading them though; I fell in love. The challenges, the beasts, the sirens, the twists and turns and the intertwining love story; all sucked me in and had a profound effect on me. Couple that with a love of the beach and it suddenly occurred to me what I wanted to write about. My family lives on Oak Island, with Bald Head Island a mere ferry ride away. Bald Head is truly magical and enchanting (if you have never been, you should go!) and was the perfect setting! Reality meet Fiction: I desperately wanted to read about a heroine that had a real reason for being strong. Last I checked being gifted with magical powers doesn’t make you an instant leader/hero/bad*ss. Experience is the only thing that can give you that kind of mental strength. So, that’s what inspired me to incorporate a little bit of tough reality into my fiction. Thank you so much for hosting the Awaken Blog Tour! I hope everyone has enjoyed reading the Daughters of the Sea series as much as I enjoyed writing it!

Title: Awaken (Daughters of the Sea 2)   Author: Kristen Day   Publisher: Self Published   Release Date: October 2, 2012   Blurb:   The sacrifices we make have the power to shift the very fabric of who we are, and ultimately who we are meant to be…   After learning of her true destiny as the intended Leader of the Tydes, Anastasia Whitman must now embark on a perilous quest to the Underworld before the age of eighteen in order to plant the seed of immortality and complete her essence to become a true Sea Goddess. But before she can make her legendary journey, an unexpected new student transfers to Lorelei; initiating a sequence of events that will unravel Stasia’s new life, and test the boundaries of her relationship with the mysterious, dark, and sexy Finn Morrison. The line between the Underworld and the Living begins to blur as gruesome ghosts, morbid reveries, and pure evil haunt her waking hours as well as her sanity. Once the details of Finn’s own startling destiny are revealed, the dangerous secrets he’s been hiding will threaten the very love Stasia believed to be indestructible. As time begins to run out, she will be forced to choose between the one she loves and the destiny she cannot escape.     About Kristen Day   Kristen Day is a southern belle at heart with a crazy streak that desperately tries to escape at every opportunity. She loves all things nostalgic, rustic, and quirky. She’s been told she sees the world through rose-colored glasses, but she prefers to think of them as kaleidoscope glasses - swirling and morphing reality into something she can digest (who hasn't pretended those pasty lima beans were really kiwi strawberry jelly beans?).   She is the author of the DAUGHTERS OF THE SEA trilogy, which includes FORSAKEN, AWAKEN (Oct 2012), and CHOSEN (Winter 2012). She loves all books, but really enjoys writing young adult, paranormal romances. She’s loved to write for as long as she can remember. Her first published work was her poem RED in second grade (you guessed it - it was a poem about the color red - life altering, right?) that won her 5 gold stars and a spot in her elementary school's poetry book. That's when her addiction to the written word officially began. She was the only kid in fifth grade that actually enjoyed diagramming sentences. Go ahead and laugh - its okay.   When she’s not writing she’s making jewelry, painting, feeding her addiction to sweet tea, watching the Discovery Channel, or going on random adventures in the mountains of North Carolina with her amazing husband. She was born in Boone, NC and graduated from Appalachian State University with a degree in Marketing in 2001.   Author’s Links   Purchase on Amazon Purchase on Barnes and Noble   Goodreads Blog Twitter Facebook
Posted by Eric Dunn at 2:38 PM No comments: 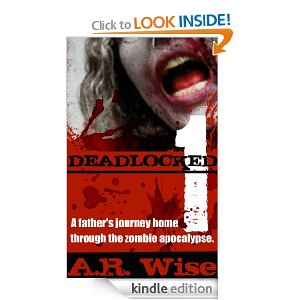 David was caught in the middle of the city when the zombie outbreak started. His wife and daughters were at home, stranded on the roof as zombies waited below. He would have to fight through hordes of undead, merciless other survivors, and a series of death defying stunts to get home. However, even if he makes it there, how can he be sure they're safe?

Deadlocked puts you into David's head as he struggles to get home. Then a final confrontation occurs that will guarantee his family's survival, but at what cost?

Plot: The plot was a little too abrupt for my liking in this book. There was no build-up to anything. The suspense of the plot was lacking in my opinion. It was almost like reading a check list. The thought of the plot was good, but the it just didn't get there for me.

Characters: I know I harp a lot on this blog about characters and the right amount of development. Having said that, I feel like the characters in this book were very much under-developed. They lacked depth in my opinion therefore it made it hard to get into the book as well.

Readership: This book is for someone looking for a quick read that is into zombie books.

I appreciate the author sending it to me, but I probably would not recommend it to anyone to read.

Book Review: From Out of Chaos by Nathan Wrann

Cor, Taylor and Caitlyn have put an end to The Creeper’s reign of terror, but at what cost? The teens’ lives are thrust deeper into turmoil as Detectives Tolliver and Orlovsky keep Cor under surveillance; Caitlyn copes with her transformation, and Taylor sets off a cataclysmic chain of events that will tragically change their lives forever.

"From Out Of Chaos" is Book 2 in the "Dark Matter Heart" Trilogy.

Plot: Since this is the second book in a series, I'm always worried about the plot. It always seems to be that the second book pales in comparison to the first book. That wasn't the case with this book and it was a pleasant surprise. The plot picks up seamlessly from the first book while still doing a great job of identifying the characters for someone who may be reading this book without having read the first one. My favorite part of this book by far is the fact that Nathan ties in things from classic horror novels such as Frankenstein and Dracula. I think it is great that he his tying into the roots of the genre that he is not writing in. It's not a knock off of those works in any way either. He has carved out a fresh new niche while incorporating elements from these wonderful classics. This book will keep you on the edge of your seat from beginning to end.

Readership: This book is readable for anyone that's in middle school or older. I would recommend high school as a good starting point though. I believe this book will appeal to you if you like vampire books, horror books, suspense books, and action/adventure books. It's got a little bit for everyone.

This book is another solid effort by Nathan Wrann.