Thirteen-year-old Kasey Madrid finally has the freedom she's always wanted. Instead of putting up with sitters or camps, she can spend the summer home alone in their "new" house. Never mind that the house is a creepy old place built in the nineteenth century. The creep factor skyrockets when Kasey meets a nineteenth-century girl named Lizzie Bellows in the basement. It takes some time for Lizzie to convince Kasey she's not a ghost, though neither girl understands why they can see each other when they live 120 years apart.

The difference in their worlds doesn't stop the two from becoming fast friends. Lizzie's life isn't easy though. In her time, her parents died in a fire many believe Lizzie started herself. As the summer passes and Kasey learns more about her own past, she is shocked to discover Lizzie is part of a terrible Madrid family secret. It's up to Kasey to go back to Lizzie's world to unlock the secret and clear Lizzie's name.

First of all I would like to thank Mr. Clark for sending me this book for review.

When I first heard from Mr. Clark about this book I was unsure about whether or not it was something I would enjoy. I have to say that I was pleasantly surprised by what I read. Dizzy Miss Lizzie is a very well written book. The characters are fun to follow and easy to relate with. Kasey is your typical inquisitive 13 year old and Paula plays the perfect role of best friend.


When the book first started I was kind of confused about where the plot was going and what the point of the book was. It didn't take me long to get into it though and from there it was smooth sailing plot wise. It had a nice little touch of mystery to it that I enjoyed. It wasn't too in depth of a plot either, which is good for the age group this book is written for.

The character development was good and not over done, which is important for a shorter novel. I thought Mr. Clark did a wonderful job of crafting all aspects of this book. I was curious as to how Kasey would break the mysterious curse and also by what her grandmother had to do with everything. If you are looking for an entertaining, quick read then this is the book for you. I would also recommend this book to any reader, regardless of gender. Sometimes people will look at a title or a cover and immediately write a book off (no pun intended). Please don't let that be the case with this book. It is well worth the read.

Prophecies are not always clear. That is what seventeen-year-old Silas Ainsley learns when he finds himself in a realm called Marenon.

The people of Marenon are on the brink of war and many of them claim that Silas is the fulfillment of an ancient prophecy that can save them. Each group wants to use him for their own purposes, but he doesn't know who is trustworthy.

Forced to make his way through Marenon alone, Silas finds himself with a band of lawless mercenaries, knowing he must uncover the meaning of the prophecy before Marenon falls to ruin.

The only way to get to Marenon is to die, and Silas has just arrived.

To be honest, it has been a long time since I have read a book in the fantasy genre so I was somewhat apprehensive about whether or not I would like this book. Now that I have finished it I can say that not only did I like it, I thought it was one of the best books I've read in a while.

Jason has a wonderful ability to paint mental pictures with the way that he writes. I could vividly see the landscapes he described and the battles that took place. The character development in this book is very well done, but not overdone. Some authors spend so much time developing their characters that it cripples their plot development, not so in this book.

Jason does a fantastic job of keeping the tempo of the book upbeat. There were rarely times that I found the book dragging along. Silas and his group were constantly on the move going from one part of Marenon to the other trying to collect the medallions they are after. I'm still on the edge of my seat waiting to see what will happen when they can get their hands on all 6 of them. This book does a fantastic job of leaving you wanting more, which is good since it's a series. There have been many series that I don't bother going on to the next book. That will not be the case with this one. The second book, The Gatekeeper, has been added to my TBR list.

Overall I think that if you are a fan of the fantasy genre this is a wonderful series for you to start. You will not be disappointed with the way that you are whisked off into the world of Marenon to follow along with Silas as he strives to live up to his title of "The Deliverer".

Last week and the beginning of this week have been the busiest weeks I have had by far since I started this blog. Thank you to everyone who has sent me things for review. Here is what I got this week:

The Deliverer by Jason D. Morrow

The Unsacred Gift by C.S. Dorsey

From Out of Chaos by Nathan Wrann

Needless to say I will be quite busy in the coming weeks! Once again, thank you to everyone that sent me these books. I can't wait to get through them and get reviews up for you.
Posted by Eric Dunn at 11:30 AM No comments:

Email ThisBlogThis!Share to TwitterShare to FacebookShare to Pinterest
Labels: IMM 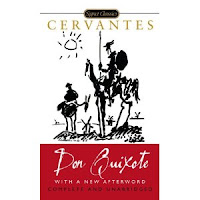 The premise of this book has always been interesting to me. I've got a pretty tall stack of books in my TBR pile, but rest assured that once I get around to reading some of my classics this will be very close to the top of the list. I mean, who doesn't want to read about a crazy middle aged guy that thinks he's a knight? Sounds like a good time to me!
Posted by Eric Dunn at 1:51 PM No comments:

"Waiting On Wednesday” is a weekly event, hosted by “Breaking the Spine”, that spotlights upcoming releases that we're eagerly anticipating.

My Pick This Week:

Whatever happened to Calico Joe?

It began quietly enough with a pulled hamstring. The first baseman for the Cubs AAA affiliate in Wichita went down as he rounded third and headed for home. The next day, Jim Hickman, the first baseman for the Cubs, injured his back. The team suddenly needed someone to play first, so they reached down to their AA club in Midland, Texas, and called up a twenty-one-year-old named Joe Castle. He was the hottest player in AA and creating a buzz.

In the summer of 1973 Joe Castle was the boy wonder of baseball, the greatest rookie anyone had ever seen.  The kid from Calico Rock, Arkansas dazzled Cub fans as he hit home run after home run, politely tipping his hat to the crowd as he shattered all rookie records.

Calico Joe quickly became the idol of every baseball fan in America, including Paul Tracey, the young son of a hard-partying and hard-throwing Mets pitcher. On the day that Warren Tracey finally faced Calico Joe, Paul was in the stands, rooting for his idol but also for his Dad. Then Warren threw a fastball that would change their lives forever…

In John Grisham’s new novel the baseball is thrilling, but it’s what happens off the field that makes CALICO JOE a classic.
*Excerpt taken from Goodreads

Book Details
Title: Calico Joe
Author: John Grisham
Genre: Adult Fiction
Hardcover: 208 pages
Publisher: Knopf Doubleday
Release Date: April 2012
ISBN: 0385536070
ISBN-13: 9780385536073
Why I'm Waiting
John Grisham is one of my favorite authors of all time and I have a love for baseball so this book seems like a no-brainier for me.

Email ThisBlogThis!Share to TwitterShare to FacebookShare to Pinterest
Labels: Waiting on Wednesday

Hey guys, come by and vote for my blog! Just click on the link under the icon and vote! Thanks so much.

Vote for this blog for the Independent Book Blogger Awards!