The Orphan, The Soulcatcher and The Black Blizzard by Kimberlee Ann Bastian

Inspiration for the Billiards Scene By: Kimberlee Ann Bastian
Movies have always been my biggest inspiration and some of my best teachers when it comes to life. I can blame this obsession on my Gramz (my mom’s mom). When I was younger, if my Grandpa didn’t have the Vikings football game on, my brother and I (later my brother, sister and I) would go through the movies that make up our Gramz movie library. And boy, does she have a library. We stuck to the classics, which were pretty much all a part of the Disney Catalog. And I’m not talking about just the animated features. Some of our favorites were Bedknobs and Broomsticks, Mary Poppins, Candleshoe, The Apple Dumpling Gang, That Darn Cat (the original), The Love Bug, Parent Trap (the original), just to name a few.
Now I can’t say for sure if I actually saw this movie at her house first, but I’m pretty sure I did. When trying to build a conflict between the gang leaders Victor and Kalvis, I thought of a scene from this movie. What is this mysterious movie you might ask? It is Disney’s 1978 classic “The Cat from Outer Space”. 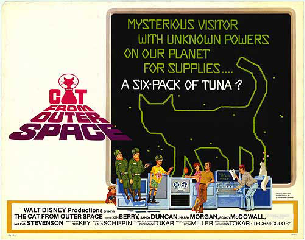 For those of you who don’t know what this movie is about here is IMDB’s description. A UFO is stranded on earth and impounded by the US government. Its pilot, a cat with a collar that has special powers, including the ability to allow the cat to communicate with humans, has eluded the authorities and needs the help of a man named Frank in order to reclaim and repair his ship to get back home. (IMDB)
From it, I borrowed a few things, particularly the idea of the billiard scene, the names Link and Honest Harry, and the idea of a talking cat to be the first image of my shape shifting spy, the Chameleon. Without this childhood classic, I’m not sure what the landscape of the story would look like and I shudder to think, because I can’t see it any other way.